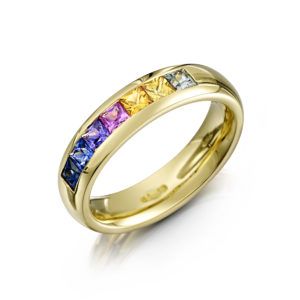 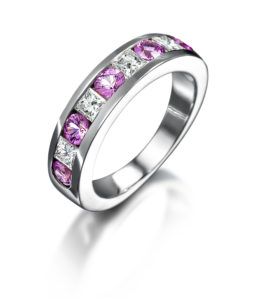 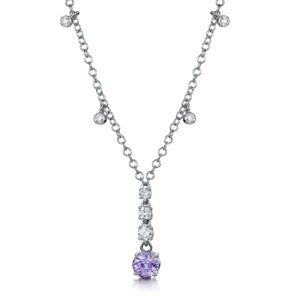 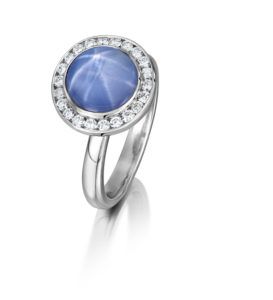 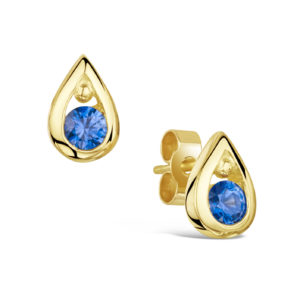 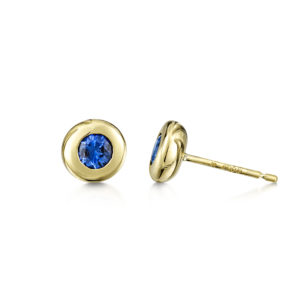 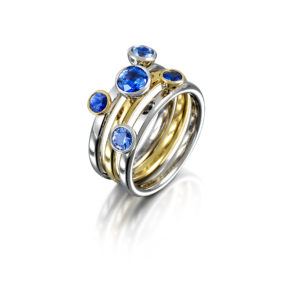 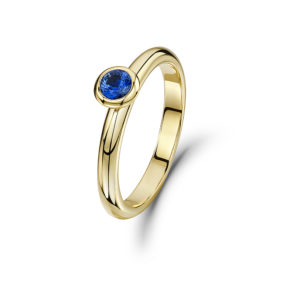 9 on the Mohs scale of hardness
Most commonly thought of as blue but actually can be pink, orange, clear, yellow, green and many other colours
September’s birthstone
The astrological birthstone is Taurus and the hour stone is 10am
Said to protect the wearer from all sorts of evil, illness, stress and general harm
‘Cornflower blue’ sapphires come from Sri Lanka
General Information on Sapphire
Any gem quality stone within the corundum family is generally called sapphire unless it’s red, when it’s called a ruby; or pink and orange, when it’s called a padparadscha. They share many of the same characteristics and are the hardest, most durable stones after diamonds. In fact, corundum is so hard it is often used in industry for abrasive and cutting purposes, like emery paper and drills. Rubies and sapphires are also used in lasers: in 1960 the very first laser was invented and a ruby was used to create the laser beam.
Sapphires are mostly found in Sri Lanka, formerly Ceylon and these are often a lovely distinctive cornflower blue shade although they also come from Madagascar, Burma, Thailand and Tanzania (among others).
Despite the fact that people generally think of blue sapphires in engagement rings, there is a wide range of types and colours, but they also share the same refractive index so can be identified easily by a gemmologist. Although deep colour saturation within a sapphire is normally regarded as good because it gives a fine, deep colour (and therefore makes it more expensive) there is such a thing as too much of a good thing. The blue colour comes from titanium, and too much of this in a stone makes it look almost black, which reduces its value as the overly dark effect is not generally desirable.

Pink sapphires have become more widely available since the 1990s when new deposits were found in Madagascar. Until then, they were exceptionally rare, and found only occasionally in Vietnam, Sri Lanka and Burma, but because of the new availability, their popularity has shot up in engagement rings. They come in a full colour range of the palest pink through to fuscia, and all colours seem to be equally popular. The colour comes from traces of chromium.
Naturally occuring orange sapphires are rarely seen however heat treated stones are more widely available.
Yellow sapphires also come in a wide range of colours and tones from light canary through to a deep golden. Until the end of the century, it was not known that sapphires were anything other than blue. As a result, they were known as oriental topaz up until that point.
Green sapphires vary between light lime green and olive in colour. Many actually consist of very fine bands of blue and yellow, which can be seen under a microscope, but blend if looked at with the naked eye. This was once known as oriental peridot. Also green sapphires change in different lights and at different angles if well cut.
Lavender and violet colours of sapphire are quite rare, and often reminiscent of tanzanite (although more durable.) They can be quite expensive in larger sizes if they are of a good quality. Despite their rarity, we are able to source them for customers and they are well worth it!
Star sapphires and rubies are classified a ‘phenomenon’ stone. They are likely to have contributed to the legend and lore concerning the powers of the sapphire because the very first sapphires cut would have been shaped in a cabochon form and when the stars appeared no one could explain them!
We now know that star sapphires have to be cabochon cut to allow the 6 pointed star to be created within the sapphire, which happens because of the way a single point of light reflects from the internal structure of the stone. This structure is made up of microscopic needles which cross at 120u . The correct angle of light entering the stone bounces off the needles and accentuates the appearance of the star. They come in a wide variety of colours, although the most prevalent are a greyish white or greyish blue.
Strangely for such a fabulous stone, most rough star sapphires are sent directly to high temperature ovens to melt the silk-like needles and destroy the star effect. This is because they are worth more as classically faceted sapphires. Heat treated star sapphires do exist but are hard to make because the intense heat needed in this process damages the needles that produce the star.
Colour changing sapphires are also classified a ‘phenomenon’ stone. Many people do not believe they exist until they see them in real life. Generally, in fluorescent lighting these stones look blue and in incandescent light they look purple, although they also come in red/brown, green/red, and green/yellowy green. A ring with one of these stones set in it can look like two different rings depending upon the time of day! A stone with a complete colour change (eg red/green) is more expensive than one with a more subtle change.
Padparadscha is the only variety of corundum other than ruby that is not simply known as a colour of sapphire. Its name is an ancient Sanskrit word which describes the colour of the lotus flower – a pinky orange colour. Padparadscha is extremely rare, and as such, very expensive, particularly for a fine piece. Similarly coloured stones are not classified Padparadschas if they have any hint of reddish orange or brown in them, although these too are stunning stones.
Sapphires are the birthstone of September and the astrological stone of Leo. The various colours are thought to protect the wearer from all sorts of evil, illness, stress and general harm, and as such, a lovely choice for your engagement ring!